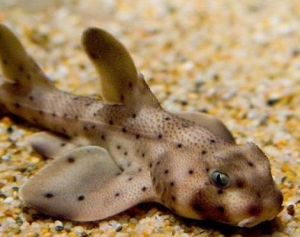 The horn shark is a small species of shark, natively found in the coastal waters of north-west North America. The horn shark is named for the broad, flattened head and high ridge found behind this shark's large eyes that is almost horn-like in appearance and makes this shark one of the hardiest of all shark species.

The horn shark is a small species of shark that typically measures about 12-18 inches in length. The horn shark can be most easily recognized by a short, blunt head with ridges over its eyes and two high dorsal fins with large venomous spines. The horn shark is usually a brown or grey color with many small dark spots across it's body.

The horn shark is a clumsy swimmer that prefers to use its flexible, muscular pectoral fins to push itself along the bottom of the ocean rather than swimming through it. The horn shark is usually solitary, though small groups have been recorded (particularly during the mating season). During the day, horn sharks rest motionless, hidden inside caves or crevices, or within thick mats of algae, though they remain relatively alert and will swim away quickly if disturbed. After dusk, they roam actively above the reef in search of food.

Horn sharks are carnivorous predators and although they do eat fish and marine invertebrates on the ocean floor,they will not eat fish in an aquarium setting, around 95% of the horn shark's diet is made up of hard-shelled mollusks and crustaceans. The horn shark uses its short hardened head to break them apart before eating the fleshy insides. Horn sharks also feed on echniderms such as sea urchins and star fish.

The Horn Shark has a very strong bite as it's jaws are powerful. It is recommended to feed using a feeding stick in the beginning, as the shark may accidentally bite if fed by hand. Overall they are tame, but may become aggressive when feeding. Best to keep in pairs (2 Horn Sharks). Horn Sharks feed off of crabs, squid, shrimp, clams. It is recommended to use cleaned squid for feeding

NO FREE SHIP ON SHARKS