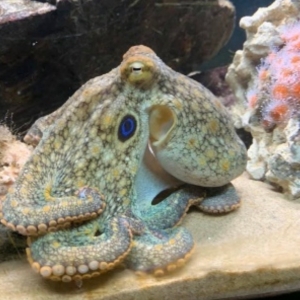 The California Two-Spot Octopus offers a very distinct appearance. It is also known by the name Bimac Octopus. They have blue spots around the eyes that can vary as far as the shade of it. The body spans about 7 inches in regards to the mantle. The arms though are considerably longer with a reach of about 25 inches.

When it comes to Octopus this is believed to be one of the friendliest species. They do spend most of their time isolated. However, if you are going to have a type of Octopus as a pet then this would be the one to have. They are very intelligent animals though so if you have one as a pet you need to be prepared. They are known to find ways to take the lids off of aquariums and escape.

Many people have reported interacting with this particular species of Octopus due to the shallow waters where they live. Generally, the Octopus will swim away in a hurry. Sometimes it will release ink too in order to help them get away without being followed. They aren’t dangerous to humans so there is nothing to worry about if you are in the water with them.

The California Two- Spot Octopus has plenty of opportunity for feeding where they reside. A steady stream of mollusks and crustaceans is readily available. They are easily able to remove the shells from most of their prey. Those that they can’t are removed through the toxins in their saliva. These octopuses will also eat small fish when they have the opportunity.

They don’t seem to go into hiding as much as other species of Octopus in the wild. They seem to be more confident in their ability to blend in. They are tolerant of other types of Octopus around them too as long as they aren’t directly competing for food.

The coloring for the overall body though can be very different, it all depends on where they happen to be in their environment. They are commonly grayish coloring with yellow spots on them. They do have the ability to change colors though through the control of their pigments.

Has a mottled brown color, but like its relatives, it can change skin color and texture when hunting, hiding, mating, or responding to other stimuli. Average size is 45cm (18in) long, a smaller species compared to its counterparts.

The adults feed on mollusks, crustaceans, and occasionally fish. Prey are subdued with a parrot-like beak and toxic secretions through a salivary gland. Their food is then scraped out with a radula. Predators of two-spot octopus include adult moray eels, scorpionfish and humans.

NO FREE SHIP ON MED OR LARGE 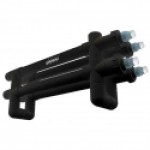