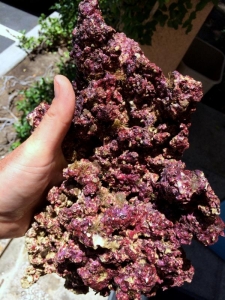 Up to 20% lighter, more porosity, more shape, more trace elements/minerals and enhanced color that mimics mother nature. 5 years of market feedback and development has made Real Reef the World's best live rock. Sold in over 40 countries, proven and vetted by thousands of Aquarists Worldwide.

Real Reef Rock is a made of 100% natural marine friendly ingredients. Its components are made of the same building blocks which wild coral and living reef rock are composed of. The ingredients are not taken from the ocean and as a result there is zero environmental impact to the world's coral reefs or marine habitat. Our product is also grown here in the U.S. in closed systems, which also avoids additional environmental impact to the ocean environment via mariculture or ocean farming.

The end result is a 100% natural eco friendly Live Rock alternative for the consumer, made and grown in the U.S.A product that consistently looks better than any of its wild or ocean cultured counterparts.

Real Reef Rock is our standard reef building rock. It comes in a variety of sizes from small to show size custom. It is very light, porous and full of holes and crevices. It is three dimensional in shape and comes in many natural shades of purple, pink and red. It replicates the look, feel and function of coralline encrusted coral skeleton rock. It’s made from all natural reef eco friendly materials and grown in greenhouses to become a bio-active rock, without the nuisance pests and hitch hikers commonly found on wild rock. This rock is great for Marine Reef and Fish only aquariums. Not suggested for Freshwater, as it holds a high stable pH.

Real Reef Shelf Rock is our version of the shelf or slab rock that use to be imported from the Kingdom of Tonga for many years, before getting banned for destructive collection practices. Many have try tried to ship similar wild products from countries like Indonesia of Fiji, but fell short of the beauty and table top shape of the Tonga Shelf Live Rock.

The Real Reef Team used Tonga Shelf as model to replicate and the results are so similar to the old Tonga Shelf that most think it is the real thing! If you always liked the look of true Tonga Shelf, without the environmental reef impact, than this is the rock for you!

Works great for adding shelfs to your existing or planned aquascape. Great for creating shelfs to accommodate frags, clams and other marine life needing a flat surface. Made from the same all natural calcium based ingredients as Real Reef Rock and functions great as a natural filter or growing surface.

30 reasons why Real Reef Rock is the Best Rock in the World!

-Positive for the future of our industry & public opinion.

-Made and farmed in the U.S.A.

-Made from 100% natural ingredients.

-Made from the same building blocks as coral rock.

-Ideal make up for the modern reef aquarium.

-Produces some of the most beautiful aquascaped   aquariums, Reef or Fish!

-Does not create a bio load in your system.

-No influx of imported nutrients to promote algae growth.

-Has a great purple coralline color dead or alive.

-Sold in over 40 countries Worldwide.

-Tried and tested by thousands of Aquarist worldwide.

-Contains no high iron or copper levels like other cultured rock.

-Contains no high Silica based Pumice.

-Not made from building materials such as grey cement.

-Great for fish only tanks, that want the reef look.

-Consistently available and always in stock.

-Every piece is unique, no two alike.

-Easily bonds with the epoxy for building reef structures.

-An innovative new product for the future of the hobby.

Only $7.69 per pound with FREE GROUND SHIPPING!

NOTE: Box and packing of $15 per 40 lbs is also factored into the price.

John Moore on 04/06/2015 11:26pm
The Real Reef Rock I received was truly fantastic. I was very pleased with its shape and coloration. Bill helped me choose this rock after having issues with GMP permits. He also offered me a special Jakarta rock which was amazing and extremely porous. Would highly recommend these rocks.
Davie J. on 04/02/2015 10:40am
very impressed! i had the older version of real reef rock band it was ok, but this newer version is really really nice, fantastic color also, great shapes, i will order more.
stevie G. on 03/04/2015 12:04pm
this newer version is much nicer than the last version, its got so much better color and my new 45 gallon looks very good i must sayy
Stevie
Louis Fren on 03/04/2015 12:02pm
Really really impressed, much nicer than i thought, going to order another 50 lbs right now, you guys are really great.
Spencer M. on 08/22/2014 11:44am
Got exactly what i ordered, pretty cool stuff the color is awesome once its in the water.