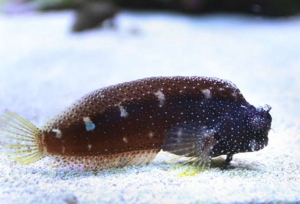 The Starry Blenny also called a Snowflake Blenny is an excellent housekeeper for your reef aquarium native to the Western Central Pacific reefs.

It eats a wide variety of algae including troublesome hair and string algae.

A common sight is of this fish with a fat belly perching on a clean rock after its meal.

Make sure to provide live rock for it to graze on and perch on.

The Starry Blenny gets its name from the numerous white to light blue dots over their entire body; they also have bushy cirri (whisker-like appendages) protruding from between their eyes, and are equipped with combed teeth for excellent algae grazing.

They are a hardy and intelligent species that will add personality to any system along with the added benefit of controlling nuisance algae growth.

A popular choice for "nano" systems as well as larger community reef setups and will get along peacefully with their tank mates as long as they do not have a similar appearance, (other close resembling blenny's).

The Starry Blenny prefers a well established aquarium containing various strains of marine algae along with stable water parameters. The Starry Blenny requires an aquarium of at least 30 gallons and should be provided with plenty of live rock for grazing, perching and hiding; the live rock should be stable as Starry Blennies will sometimes dig and move rubble and other objects around which can dislodge structures and can lead to injury.

The Starry Blenny is a herbivore and grazes on various marine algae within its natural environment. In the aquarium it should be fed a variety of vitamin-enriched marine algae, vegetable matter, and quality, Spirulina-based prepared foods. It will also gaze upon ornamental and nuisance micro/macro algae that may already be present in the aquarium. 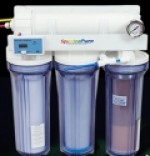