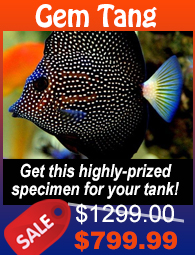 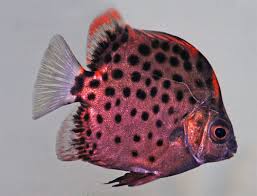 A popular brackish water aquarium fish, the Scat occurs in three distinct color forms (green, silver, and red) which were once thought to be different species but are now all considered to be variants of the extremely widespread S. argus. Found along nearly every coastline of the Indo-Pacific region, scats are amphidromous, which means they regularly move between freshwater in marine habitats.

Although they are sometimes marketed as a freshwater fish (and can be kept as such as juveniles), scats will do best in brackish or marine aquariums.

The ruby scat is the least common color variant of S. argus, and is typically found in estuaries and mangrove forests.  Although juvenile scats can tolerate pure freshwater for a while, they will need to be transferred to a brackish or full marine aquarium later in life.

Scats are omnivorous and will eat any type of food including flakes. Plenty of vegetable matter including marine algae and Spirulina helps to keep them healthy, combined with dry food and occasional meaty items such as frozen Mysis shrimp and enriched brine shrimp. They may also eat vegetables such as spinach or broccoli, and as well as plants and macroalgae. They are known to graze on nuisance algae, including hair algae, in the aquarium.

A social fish often found in large aggregations, they do well in groups of 5 or more.