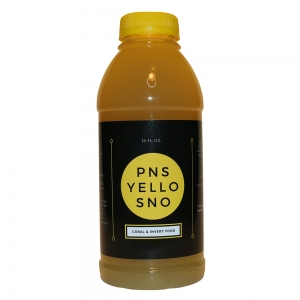 While the waters surrounding a coral reef might otherwise be clear, they are sometimes riddled (in some cases seasonally) with tiny bits of suspended organic matter. Because these particulates look like snow as they slowly tumble through the water column, they are oftentimes referred to as “marine snow.”

Marine snow originates as miniscule bits of organic debris (remains of dead phytoplanton and zooplankton, zooplankton feces, suspended particulates, etc.) upon which microbes can simultaneously hitch a ride and grab a snack. These suspended particles grow as they aggregate via flocculation and adhesion.

Marine snow flurries can be reach impressive densities near reef habitats; this is due to the copious amounts of mucus discharged by corals into the surrounding waters, which promotes snow aggregation greatly. In some calm, productive, well-sheltered reef waters, marine snow flocs can reach several centimeters in width. Due to fragmentation, biofloc is increasingly finer with increasing wave action.

At near-neutral buoyancy, marine snow can take hours to settle out in wave-swept waters; it might take days to reach the sea floor in deep, open ocean environments. Along the way, it picks up microbial hitchhikers. In some cases, the organic content of the aggregate is so rich and its bacterial activity so high that the particle becomes locally anoxic. This creates a competitive advantage for purple non-sulfur bacteria (PNSB) which actually thrive in the absense of oxygen.

Though they can perform photosynthesis under very poor light conditions, PNSB can build and utilize their photosynthetic machinery only under anaerobic conditions. Thus, in marine habitats, they are most abundant in the moderately illuminated (but also poorly oxygenated) mid-bottom of the epipelagic zone (photic zone) at around 100 feet depth.

PNS YelloSno™ closely simulates a marine snowfall. This truly unique product contains a chitin-based substrate that is fermented with live purple non-sulfur bacteria and then preserved via pasteurization. Loaded with protein, B vitamins and amino acids, PNS YelloSno™ can significantly improve growth and coloration in a broad range of coral species.

To feed, add up to one 16 fl oz bottle for every 500 gal system water (approximately 1 mL/gal) in an area of high flow. For best results, use frequently but sparingly. Use weekly when included as part of a regular feeding regimen.

Strong odors and slight color variations are normal for this product.