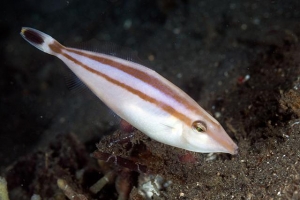 The Rhinoceros Leatherjacket (Pseudalutarius nasicornis) is a species of Filefish found among the Indo-Pacific Ocean, They typically inhabit deep-water reefs, though they occasionally search shallow seabeds of grass for small invertebrates. They have a white body with two horizontal, brown stripes near their dorsal region. They reach a maximum size of 7 inches and should be kept in a tank of at least 55 gallons. Their diet should consist of small invertebrates, such as copepods, mysis and krill, and they should be monitored in a reef tank, as they may nip at soft polyps.