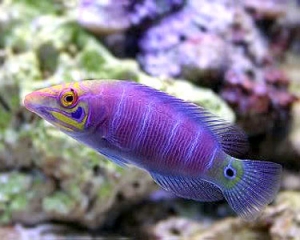 An ideal fish for the reef aquarium, this recently described species was collected for the trade long before it was described. Once thought to occur only in a few isolated areas, it has been recorded from Australia, Marshall Islands and other locations throughout the Indo-Pacific. Found only in deep water, further exploration will likely expand its range. Bold and hardy with a great appetite, The Mystery Wrasse is ideal for the reef aquarium.The majority of the body is pinkish purple with thin, white vertical stripes and an eyespot surrounded by a yellowish hue on its green tail. Some younger fish will have more green in the body, which will quickly change to red in the aquarium.

This hard to find species is suitable for a 20 gallon or larger aquarium with lots of live rock and a sandy bottom. It is an excellent fish for a reef aquarium and passive with most popular reef fish, including other wrasses. It has also been used as a watchdog and eliminator of pesky aquarium flatworms.

When first introduced into the aquarium, live saltwater feeder shrimp should be used to entice this fish to eat. It prefers a diet of finely chopped meaty foods and occasionally frozen preparations.