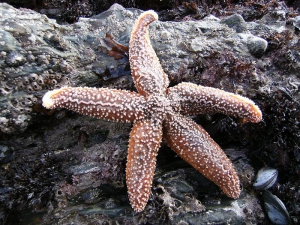 Description
Body with small disc and 5 rather short, broad and tapering arms (occasionally, specimens are found with 4, 6 or even 7-8 arms); R/r: mostly 4,5 (exceptionally 3,5-7), up to 520 mm in diameter (but usually smaller). Often coloured orange, but may vary between pale brown to violet.

Dorsal side
The dorsal skeleton is faintly developed, resulting in a rather soft and highly flexible skin, with numerous small papulae in the, relatively large, soft areas. The papulae usually occur in groups of three. The major spines of the upper surface often in one or more longitudinal rows. Both straight and crossed pedicellariae scattered over the whole dorsal side of the body. Their number varies from very numerous to very scarce (A. rubens test).

Oral side
On the oral side, almost exclusively straight pedicellaria are found, especially attached to the inner furrow spines, but also on the sides of theadambulacral plates, within the furrow (A. rubens pedicellaria). Theadambulacral spines in the proximal part of the arm are fairly regularly alternating one and two. Externally to the adambulacral spines, there are generally 3-4 (in young specimens only 2) ventro-lateral spines in an oblique row (A. rubens spines).

Habitat
It is found on a variety of mostly hard substrata and occurs from the upper tide mark down to about 400 m, exceptionally down to 650 m.

Distribution
This species is distributed from Iceland and the White Sea southwards to Senegal. It is not found in the Mediterranean.