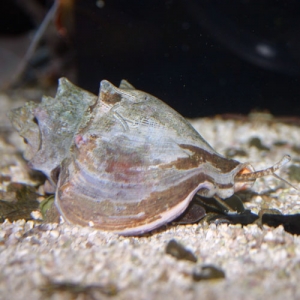 Praised for their hardiness, the Fighting Conch requires open, deep sand beds in which it can forage for food. Though multiple Fighting Conches should be housed in larger systems, single specimens are suited for any size reef aquarium. Keep in mind that the Fighting Conch has a voracious appetite; as such, supplemental feeding is required in smaller systems and recommended in even the largest aquarium setups.

Classified as an omnivore, the Fighting Conch will consume detritus from your aquarium substrate. Supply pieces of fresh fish and dried seaweed, as well as high quality frozen foods to supplement the diet of the Fighting Conch. Like other invertebrates, the Fighting Conch is sensitive to high levels of nitrate and will not tolerate copper-based medications.

The Fighting Conch (Strombus alatus) is a fairly robust, thick-shelled conch. It has a greyish shell with a darker brown color on the inside. Its body is greyish and it has two large eyes with obvious irises. Despite the aggressive name, they are algae and detritus eaters and are harmless to other animals.  The True Conchs (Strombus, Lambis, Tibia, Terebellum, Varicospira, and Eustrombus) are algae eaters with some of the most iconic "seashell" shapes. They are usually found buried in the substrate, most often finer sand environments and may live in the open sandbed or on the reef. Some, especially Strombus and Lambis conchs, have well developed eyes that will watch the action around them. These eyes extend from under the lip of the shell and the left eye usually expends from a notch in the side of the shell.  Conchs feed on algae and detritus in the aquarium. They need a large amount of plant matter in their diet and may starve if out-competed for food or if there is not enough algae in the aquarium to support them. Since most conchs - especially larger, mature snails - have large openings, it is best not to keep them in a tank with potential predators like some fish and hermit crabs. Conchs move using their powerful foot to propel themselves. When not buried in the substrate or when threatened, they can appear to hop over the bottom.