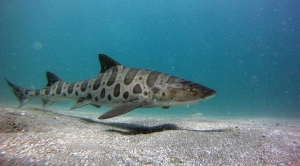 The Banded Houndshark aka Leopard shark (Triakis Scyllium) is a species of Hound Shark found common in the northwestern Pacific from the southern Russian to Taiwan. Found on or near the bottom, it favors shallow coastal habitats with sandy or vegetated bottoms. This shark reaches 1.5 m (4.9 ft) in length. It has a short, rounded snout and mostly narrow fins. It is gray above and lighter below;

younger sharks have darker saddles and small dots, which fade with age.

Leopard Sharks feed off of crabs, squid, shrimp, clams. It is recommended to use cleaned squid for feeding.

* We do not sell each and every shark listed below, these are just a few suggestions.