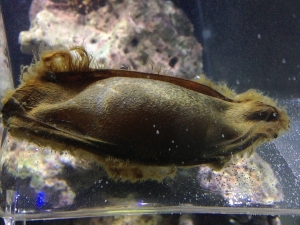 Shark Egg - Chiloscyllium Punctatum - Cat Shark - Banded Cat Shark Egg One of the most common sharks kept in aquariums, the Black Banded Cat shark is a very popular choice for a fish only system. Hatching time for the egg will be approximately 1 - 4 weeks depending on development stage and environment in the home aquarium. Requiring a tank of at least 180 or larger, this fish grows to be 3 - 5 feet. Requires soft substrate as rough sand will cause infection due to lacerations. Coloration will be cream-colored with broad, dark brown stripes.

The Black Banded Cat Shark is known as a Cat Shark because the barbels at the mouth look like cat whiskers. It is also referred to as the Brownbanded Bamboo Shark, and has a cream-colored body with broad dark black stripes. There may be large, muted brown spots between the stripes when the fish gets larger. The mouth of Black Banded Cat Shark is well in front of eyes, the dorsal fins are spineless far posterior on tail, greatly elongated thick precaudal tail, long and low anal fin just anterior to caudal fin, no lateral ridges on trunk, dorsal fins with concave posterior margins and elongated free rear tips, first dorsal-fin origin opposite anterior halves of pelvic-fin bases; usually no colour pattern in adults but young with bold dark transverse bands and a few dark spots. The Black Banded Cat Shark is a bottom dwelling shark. It will eat any crustacean in the aquarium. It requires sand as the substrate as the abdomen is easily scratched by a coarser substrate, which may lead to an infection. The Black Banded Cat Shark is a high maintenance fish. The Black Banded Cat Shark may act aggressively toward other fish. These fishes are not venemous but may bite if provoked. Level of Care:
The Shark Egg is a high maintenance fish. Maximum Size:
The Black Banded Cat Shark grows up to 48 inches. General Size Specifications:
This item is roughly around 4 inches in size. Upon hatching the shark will be about 5 - 6. Tank Conditions:
The Black Banded Cat Shark should ideally be kept in temperatures between 72 and 78 degrees Fahrenheit. A pH value of 8.1 or 8.4, and a specific gravity of 1.020 to 1.025 should be maintained. When kept with invertebrates, the specific gravity range should be 1.020 to 1.025, for the invertebrate species. In a fish only aquarium, the specific gravity should fall between 1.020 and 1.023. Habitat:
The Black Banded Cat Shark fish is distributed throughout Indo-Pacific Ocean in India (east coast, Andaman Islands), Malaysia, Singapore, Thailand, Indonesia, Viet Nam, China, Taiwan , Japan, Philippines, south coast of New Guinea (Papua-New Guinea and Irian Jaya, Indonesia), north coast of Australia. Feeding and Diet:
The Black Banded Cat Shark is a carnivore and likes to eat variety of chopped crustaceans, fish pieces, shrimp, shellfish, squid. Feeding may be difficult in the beginning. The best way to begin feeding is by offering small pieces of cleaned squid or freshwater ghost shrimp.