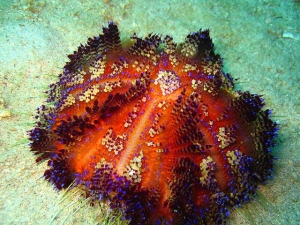 This is truly a jewel of the sea – a dangerous one, though. The Fire Urchin (Asthenosoma varium) is probably the most beautiful species of sea urchin in the entire ocean. It gets its name from its burning ember appearance. The red body looks as if it really could be radiating heat against the ‘cooler,’ darker spines.

It’s so stammeringly enchanting that you might be inclined to touch it… but DO NOT. The other reason why this urchin is named after fire is that its spines are loaded with poison. If you get pricked by one of the spines you’re in for anywhere from 15 minutes to several hours of stinging pain. It almost reminds me of the giant ruby in Aladdin when Abu just couldn’t help himself… we all know how that turned out.

Sea Urchins are widely known for their ability to rid nuisance algae.  They are commonly seen on the sand bed or in the live rock, making their way around, constantly cleaning up leftover fish food and algae.

Sea Urchins are very popular due to their friendly nature, not bothering other sea life and they do well in most conditions.   They are easy to identify as they have a round center with spines which it uses to move around but also as protection from predators. 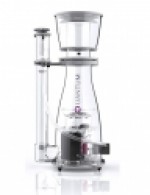