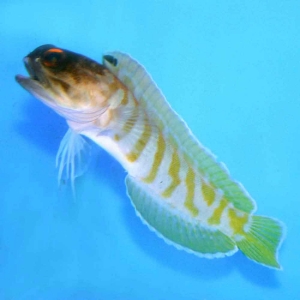 The head and body of the Moustache Jawfish, also known as the Black Cap and Tiger Jawfish, are green and orange. It has an orange stripe above the mouth, resembling a moustache.

Moustache Jawfish (Opistognathus sp.) are white to ivory with orange horizontal stripes and dark brown coloration around the face. They have orange "eye brows" and yellow fins.

Jawfish can be some of the most comical and amusing members of an aquarium community. They have large eyes and a big mouth that they open wide to intimidate other tankmates away from their territory. Jawfish build burrows in the substrate and under rockwork and will quickly dash in and out of their holes when threatened or feeding. Some jawfish even appear to "decorate" their entrances with larger bits of stone and shell. They should be given a soft mixed substrate that is at least 3-4 inches deep to build their burrows.

Jawfish are generally peaceful towards other fish but most will fight with other jawfish. They can be kept in reef aquariums but their elaborate burrows can cause some rockwork to be unstable and may collapse structures. Make certain all rockwork is secure and on the bottom of the tank to help prevent collapses! A collapse could injure your jawfish or other tankmates and may even break the aquarium of a heavy rock falls against the glass. Jawfish have been known to jump from uncovered aquariums when threatened, especially at night, so a tight-fitting lid is essential.

Most jawfish are not fussy eaters. They will accept a wide range of frozen or fresh meaty items like brine shrimp, mysis shrimp or larger bits of shrimp, scallop, krill or similar items for larger jawfish. Since jawfish may not venture far from their burrow, especially when first introduced into the tank, it may be necessary to target-feed them to make certain they are not being out-competed for food by other tankmates.

The head and body of the Moustache Jawfish, also known as the Black Cap Jawfish, are green and orange. It has an orange stripe above the mouth, resembling a moustache.

It should reside in a 30 gallon or larger aquarium with a tight-fitting lid to prevent it from jumping out, and at least 3 inches of mixed substrate for burrowing. It poses a possible threat to small shrimp.

The Moustache Jawfish is hardy and will spawn successfully while in the aquarium.

The diet should consist of a variety of marine fish, crustacean flesh, and mysid shrimp. It prefers to be fed at least three times per day. 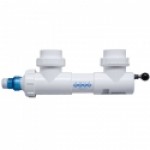