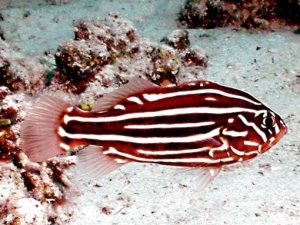 The adult Golden Stripe Soapfish Grouper are brown in colour with white incomplete lines running parallel throughout the body. There is blue coloration at the end of tail, and fins.

The juvenile Golden Stripe Soapfish Grouper coloration is quite different. Basically six black and white evenly spaced stripes run horizontally the length of the fish. As it gets older, the white stripes get smaller until they become the dotted pattern and the black becomes lighter until the fish looks like the photo above.

Habitat: The Golden-striped Grouper, Grouper, Goldline Grouper, or Sixline Grouper are collected in the Indo-Pacific. These are found in the waters of Srilanka,India, Maldives and other Indo-Pacific water regions.

Minimum Tank Size Suggested: A 50 gallon or larger aquarium is required. The Golden Stripe Soapfish Grouper should be kept as the single grouper in the aquarium with other larger fish. In addition to possibly eating tank mates, it has a poisonous mucus coat. When frightened, it releases the poison grammistin from the mucus which can kill other fish. This toxin is almost always found in the shipping water. Be sure not to add the shipping water to the aquarium.

Care level:
Expert Only!!!
Not Cover Under Arrive Guaranteed
Currently there are no reviews for this product. Share your opinion with others, be the first to write a review.