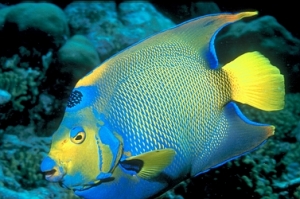 The adult queen angelfish overall body color can be described as blue to bluegreen with yellow rims on its scales.

Queen angelfish are also known to have blue markings around each gill cover. Juveniles have dark blue bodies with yellow lips, gills, and tail and vertical bars ranging in color from light blue to white.

The queen angelfish may live up to 15 years in the wild. Queen angelfish inhabit reefs and are common near Florida, the Bahamas, and the Gulf of Mexico.

Although, the queen angelfish is considered to be moderate in difficulty to keep in captivity, it is ill-suited for the inexperienced aquarist.

They are an aggressive species that require a large aquarium.

Most aquarists recommend a minimum tank size anywhere from 150 on up to 180 gallons.

The queen angelfish will harass other fish without discrimination, particularly new additions to the aquarium. It should be the last fish added to any system.

It is not a reef safe fish, and larger specimens may nip at or consume corals, particularly stony or soft ones, and ornamental invertebrates.

NO FREE SHIP ON LARGE OR XLG