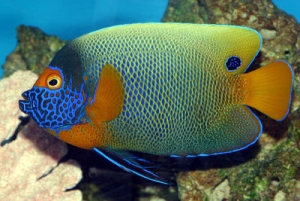 The Blueface Angelfish occurs in the Indo-Pacific,inhabits lagoon, channels and outer reef slopes with prolific algae growth. Juvenile specimens are typically found in shallow waters and are especially common in inshore caves with algae growth.

The juvenile fish is covered in vertical black, white and sapphire blue stripes. When it reaches a length of roughly 5 in / 13 cm, it will start changing into its adult coloration. The body develops a pale yellow shade bluish scales and the pectoral fin becomes bright yellow.

The face of the adult fish is mottled-blue with small yellow spots and a characteristic yellow mask extends from eye to eye (but not much beyond each eye). On the caudal end of the dorsal fin, you can see a black eyespot.

Ideally, it should be provided with an established 90+ gallon aquarium setup with a live sand substrate (they enjoy snacking on benthic invertebrates) and plenty of live rock for grazing, shelter, and territory.

They should also have plenty of open swimming space and strong water movement in addition to high intensity lighting. 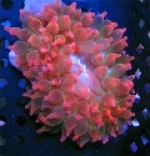