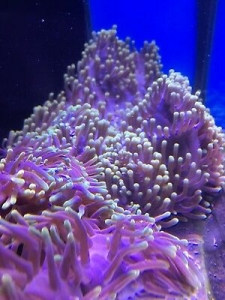 CURRENTLY UNAVAILABLE
Price: 0.00
Price varies based on options.
Qty: - +
- OR -
Add To Wishlist

The Magnificent Anemone, Heteractis magnifica, also known as the Ritteri Anemone, is a sea anemone that lives attached to a solid surface with much of its base exposed in marine Indo-Pacific reefs.

It prefers warm waters between 24-32 degrees C. with good flow but shallow enough that the symbiotic green algae in its tentacles can photosynthesize (1-50 m. depth).

It is a large anemone that grows in various shapes and colors (usually tan, red, pink, purple, orange, blue or green) to sizes up to three feet in diameter.  In some locations, large colonies of individuals, presumably clones, form beds of H. magnifica in shallow water; this species is usually solitary at greater depths.  Like the three other species in genus Heteractis, its long tentacles end in a characteristic bulbous tip, which contains the stinging nematocyst cells it uses to paralyze its vertebrate and invertebrate prey.

Heteractis magnifica, as well as the other species in family Stichodactylidae (nine species total) are best known as clownfish anemone, because they commonly form symbiotic relationships with fish mostly of the genus Amphiprion.  Although in captivity they associate with multiple species of anemone fish, in the wild they typically host only a particular species, depending on their location.

The Magnificent Anemone also forms associations with shrimp, crab and other invertebrate species.

NO FREE SHIP ON RITTERI ANEMONES

the quickest and most affordable shipping rate.